In 2005, Dr. Dick Jones and his wife moved to Naramata, British Columbia, part of the Naramata Bench region of vineyards. Not long after arriving, Jones began making wine from his Pinot Gris and Gamay grapes.

He loved the smells of his first small fermenting lots. But when he tried the finished wine, much of the aroma was gone. Preserving aromatics is something winemakers, especially those making white wines, struggle with. As fermentation produces aromatic compounds and carbon dioxide, the carbon dioxide molecules rise and push out the aromas. Various solutions, such as cold fermentation, have not proved widely effective.

In 2013, Jones sourced a membrane developed in Norway. Jones used it on a small fermenting vat in an initial trial. Looking like a shiny piece of plastic paper with a thin membrane coating on one side, the idea was to ensure that when the wine fermented, the carbon dioxide would pass through, but aroma compounds, because of their shape and chemical makeup, would not go through but remain in the headspace.

A pulmonary scientist, Jones recognized the potential of this approach — human lungs are designed to release carbon dioxide and keep everything else in.

This is almost exactly the same process we use when we’re breathing.
— Dr. Dick Jones

In 2015, Jones partnered with Pentage Winery co-owner Paul Gardner to try the process on commercial-size fermenting vats. For their first vintage, they fermented 700 litres of Pinot Gris in a 1,000-litre tank. Rather than using a flat sheet membrane, the sealed vat was connected to two 18-inch-long cylinders, each containing thousands of hollow tubes — each tube was a membrane. The entire prototype was roughly the size of a suitcase.

Once the wine was ready, Gardner organized a panel of 16 wine industry members, who blind-tasted the AromaLoc™ Pinot Gris, and the control Pentage Pinot Gris made from the same juice and yeast. All of them preferred the wine fermented using the AromaLoc method.

What’s appealing is that you’re not adding anything to the wine, you’re using what’s already there.
— Marcus Ansems, Master of Wine and co-owner, Daydreamer Winery

Samples of the wines were then analyzed for aroma compounds at the University of British Columbia’s Wine Research Centre. The AromaLoc wine showed much higher levels of the high impact aroma compounds than the control wine.

Through ongoing R&D, AromaLoc has continued to improve its system, resulting in lowered costs, a smaller machine, and improved results.

For an in-depth look at AromaLoc’s evolution, penned in 2016, this detailed news release is enlightening. 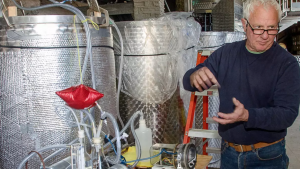