AromaLoc™ was invented in October, 2012, when Dr. Dick Jones, a retired pulmonary research scientist, began making wine from grapes he grew in the Okanagan area of British Columbia.  He called his small vineyard “Sweetspot” because of the beautiful setting of steep hillsides and the stunning waterfall visible only from his house.

He planted his vineyard on the steep hillside facing the waterfall.  His background in lung gas exchange informed his reaction to a problem he discovered during his first year of making wine from his own grapes.  He noticed nice aromas coming out of a tank of Pinot Gris during fermentation, and immediately began thinking of ways to prevent what he later learned was called CO2-induced aroma stripping, and keep the aromas in the finished wine.  After a literature search, he was surprised no one had tried to solve this 8,000 year-old problem using the method he had in mind.

A special membrane would be required.

Since winemaking happens only once per year, he needed to do something immediately to see if his method to preserve aroma made any difference to a batch of Pinot Gris that was already near peak fermentation.  Searching through the things kept when he retired, he found a container of soda lime, a granular material that absorbs CO2.  He quickly set up a tiny study, and used only about 1 litre of the fermenting Pinot Gris.  He let the headspace gas flow through the soda lime to remove some of the CO2 and returned what was left to the headspace above the 1 litre sample.  After fermentation was complete, he got only one bottle of the experimental wine, which was compared to the larger volume that was left untreated.   A local wine expert blindly sampled the two wines and confirmed Jones’ impression that the experimental wine had significantly higher aromatics.

After an exhaustive hunt, Jones managed to find an appropriate membrane he felt would work. Over the following winter, Jones continued researching aroma preservation techniques and conducting experimental trials.  His idea was novel, so he embarked on the demanding patent application process.

He worked with Paul Gardner, a commercial winery owner, to build a membrane housing and prepare for the 2013 winemaking season. Using his invention on white and rosé wines would be straightforward, but red wine fermentations posed unique challenges, due to the need for cap management while still keeping the headspace gas tight.  Solutions were developed, and more was learned.

In 2014, Jones sourced a promising membrane, flew to Europe and personally brought back four sheets. These membranes were used during many trial experiments to test the theory that concentrating aroma in the headspace could reliably translate into retention of aroma in the finished wine. Without exception, the experiments were successful — it was now time to test larger wine volumes.

In 2015, a configuration that allowed for a large membrane surface area in a small footprint was developed, allowing for the handling of larger CO2 volumes from larger fermentation volumes.  In that year, the first experiment on a small, commercial-size fermentation was conducted, using side-by-side 700 litre volumes of Pinot Gris.

The protocol for all AromaLoc trials is to have a large tank of wine or must ready for fermentation. Any adjustments are made to this entire volume, and it is inoculated with the desired yeast.  It is then mixed and racked into two identical tanks which are fermented with the same parameters. One of the tanks is fitted with AromaLoc technology (experimental), while the other is allowed to vent CO2 in the conventional manner (control).

Results from a Pinot Gris 2015 trial can be seen below.  This tasting, like all others, was carried out by a tasting panel comprised of accredited industry professionals.

The control and experimental  results are presented in two different ways to make visualization easier. The spider graph (Figure 1) compares the experimental wine (red line) to the control wine (blue line), and is expressed as the percent change from control.  On the bar graph (Figure 2), the control is represented by zero on the graph.  When AromaLoc treated wine scored higher than control, the bar is greater than zero.

It is clear that for all seven attributes tested, the AromaLoc treated wine scored higher, especially for aroma and overall rating.

The results of the 2015 experiment led to the design of a machine, and AromaLoc was legally incorporated in 2016. 10 machines were constructed, each capable of handling up to several thousand litres of fermenting wine

Having succeeded in achieving aroma preservation, the issue of fusel alcohol retention presented a new challenge that needed to be resolved, without affecting retention of the beneficial aromas. This led to a re-design. The new machine was tested in 2017 — the modifications proved successful, resulting in the enhancement of desirable aromas, and the elimination of bitter aftertaste.

Larger AromaLoc models were tested in the fall of 2017 with positive results. In that year, the company began work with an ultra-premium winery in Napa Valley. This initiative presented two challenges.

First, a red wine was to be fermented, which necessitated the design of a punch down tool that could maintain a gas-tight headspace. Second, because the fermentations were being done in wooden barrels, a gas-tight seal was also required. Working with TN Coopers, solutions to both issues were developed. AromaLoc proceeded to build a model capable of treating four barrels simultaneously.

The California winery’s 2018 Cabernet Sauvignon trial results convinced the winery to run another trial the following year, with excellent results. TN Cooper refined the barrel head and punch down system for the latter trial, and now have it available as a commercial unit for use with AromaLoc.

Okanagan Valley trials in 2018 were also successful, carried out on fermentation volumes ranging from 18 to 2200 litres.

AromaLoc machines were successfully deployed with outstanding commercial wineries in California, Texas, Spain, Italy, and Germany during the 2021 harvest and production season. In December 2021, the company received a WINnovation Award from the California-based Wine Industry Network, recognizing AromaLoc’s major contribution to furthering innovation in the wine sector. AromaLoc’s panel at the 2021 Wine Industry Expo in Santa Rose, California, one of the largest industry gatherings in North America, was the most heavily attended event at the conference. The German Winegrowers Association (Deutscher Weinbauverband) is considering AromaLoc’s technology for its 2022 innovation prize.

The company is currently assessing various strategic opportunities to ensure AromaLoc’s continued growth and success into the future. 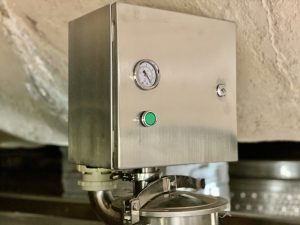