So begins this informative article, Many Roads to Mouthfeel  — Why texture and body are important, and how to enhance them, written by Tim Patterson in Wine Vines Analytics.

Mouthfeel is big business. In recent years, the texture of wine has taken its place right alongside aroma and flavor as a major concern for wine writers, winemakers, wine marketers and, of course, vendors of specialized products designed to aid and abet. There’s even a Mouth-Feel Wheel, modeled after the Aroma Wheel, developed by researchers at the University of Adelaide and the Australian Wine Research Institute.

Behind the mouthfeel boom are at least three broad developments. First and foremost, the steady influx of new wine consumers has meant more and more demand for “smooth” wines—even at the ultra-premium end of the market. Many wine buyers want fruit and silk, and they may not be as intrigued by overtones of leather and cigar box or the grip of firm tannins as their traditional wine-loving predecessors.

Second, the trend toward high-extract, high-alcohol reds has meant a turn toward winemaking techniques to ensure that elevated tannin and ethanol levels don’t stick out, but rather get wrapped in a softening mouthfeel. And third, responding to demand, suppliers of winemaking adjuncts have done considerable research and brought forth a dazzling array of textural enhancements. All of which has led to lots of strategies, lots of additives and a growing if imprecise vocabulary: body, viscosity, volume, astringency, softness, roundness, etc.

What there is not, so far, is a large body of rigorous, scientific research into exactly what compounds in what concentration contribute to which sensory effect. In order to match a given technique with a particular wine, trial and error—more specifically, bench trials—are the best and maybe only way to sort through the mouthfeel maze.

Before mouthfeel became an industry, good texture in wine was promoted by three main kinds of practices. For whites especially, aging on the lees, with or without periodic stirring, was known to add pleasing body—assuming the lees themselves were clean and not too funky. For some whites and most reds, malolactic fermentation could transform the comparatively sharp malic acid into kinder, gentler lactic acid. Finally, barrel aging and barrel fermentation could add oak tannin for structure and, over time, increase roundness through evaporation and concentration. Almost all the products on the market build on these traditional materials and methods.

An “old school” wine was one of the reasons for this article. A while back, I tasted a sample of the 2007 Pinot Gris Reserve from Cooper Mountain Vineyards in Oregon’s Willamette Valley. It seemed like a nice wine in many respects, but what stood out was rich, round mouthfeel, something too often sadly lacking in the explosion of Pinots Grigio and Gris on the market. The explanation from French-born-and-trained Gilles de Domingo centered on lees, lees and more lees.

Cooper Mountain’s grapes are organically certified, and get that way through Biodynamic practices, so they presumably arrived in the cellar full of useful stuffing. The grapes were whole-cluster pressed, mainly fermented in stainless, with a small portion in used barrels that didn’t impart oak flavor, just oxygen. Fermentation was conducted at a slightly higher temperature than many whites get, which de Domingo thinks helps extract more polysaccharides. Some of the barrels got lees additions from other barrels used to ferment top Chardonnay lots; when any of the barrels showed signs of oxidation, the wine and the lees went into tank. In tank, the lees simply rested without stirring; the wine did not go through malolactic, and eventually it was sterile filtered. Needless to say, within the Biodynamic orientation de Domingo picked up from his family’s winery in the Bordeaux town of St. Emilion, this wine didn’t get any of its textural charm out of a bag or a jug.

The more that researchers (most of them vendor-funded) looked into the mouthfeel magic lees could confer, the more parts they found to the puzzle, leading to a whole range of products rather than one single silver bullet. Besides the Cooper Mountain Pinot Gris, the other conversation that prompted this article was with Russ Robbins of Laffort USA, who described the origins of his company’s Biolees additive.

Researchers from the University of Bordeaux, aware that lees aging had enhanced mouthfeel for hundreds of years, decided to figure out why, by isolating the various candidate compounds in spent yeast. Their assumption, still widespread in the industry, was that mannoproteins were responsible. One by one, they added the isolates to wine and ran them past trained panels. Mannoproteins turned out to add nothing, but voilá: a small polypeptide (amino acid) did the trick and became Biolees, a product Robbins describes as “wildly popular.”

Robbins was also the first of several mouthfeel mentors to point to the association between tactile, textural elements and at least the perception of sweetness. It’s not that the various yeast- or tannin-based products actually contain sugar, but there is a deep-seated association in humans between viscosity and sweetness—“a sensory connection,” Robbins says, “regardless of the chemistry.” The mouthfeel components help balance the acidity, the alcohol—perhaps even harsh tannins—and the net effect seems sweeter. As a result, many Biolees customers use it in their wines mainly for the sweetening effect, and it even goes into commercial organic grapefruit juice as a non-caloric sweetener.

The range of yeast- and lees-based additives is broad indeed. To begin with, there are active yeast strains that promise to raise the production of polysaccharides, and some that contain more of the peptide that powers Biolees. Other strains claim to facilitate the extraction of tannin and the creation of good structure.

In Robbins’ assessment, yeast strains may have “a tendency to promote good mouthfeel, rather than a guarantee,” which he thinks additives can deliver. Products made from dead, inactivated yeast range from extracts to powders to yeast hulls to whole yeast, the key ingredients coming from cell walls or cell innards, processed or not processed to varying degrees. Some are designed to be used during fermentation; some later on, in various dosages.

By and large, these are perfectly “natural” products, not synthesized or genetically engineered. They offer two things a winery’s own homegrown lees may not: the promise of very precise, targeted effects, and avoidance of the potential for the unwelcome, reductive aromas in-house lees can sometimes generate. With rare exceptions, the claims made for the various additives are true—that is, the companies really do extensive research and testing, using skilled researchers, high-tech machinery and legitimate statistical methods.

But what happened during the trials in the company’s controlled laboratory situation may or may not work with a specific real-world wine with its own chemical make-up and stylistic destiny.

“You can’t just tell someone, ‘do this, it’ll help,’” says Michael Jones, an enology specialist with Scott Laboratories, which distributes numerous mouthfeel-improvement products. “It varies from case to case. One solution may fix a problem one year, another the next. The evaluation here is sensory, not chemical. The earlier a solution is found, the better—and the cheaper, too.”

In other words, the most important steps a winery can take to improve mouthfeel are trial and testing—not simply purchasing.

The second large category of mouthfeel enhancement products are tannin additives, mainly derived from oak but also sometimes from grapes. Barrels used to do this job; these days, particularly in a recession, oak alternatives play a prominent role—powders, chips, nuggets, etc., toasted and untoasted.

Tannin additions can potentially help with three things. Most obviously, they can add tannin and therefore improve the structure of wine in the mouth, which is useful in cases where grapes themselves are tannin-deficient. This may not be a major problem in the Napa Valley, but it certainly can happen, and as Michael Jones points out, some indigenous and hybrid varieties such as Frontenac have no tannins to work with.

“The value of oak in additions,” Russ Robbins says, “is to balance the tannins—not simply increase them—in situations when you have too much of one kind, perhaps astringent ones.” As with yeast/lees products, one size does not fit all; trials are the best investment. Untoasted oak granules and chips have gotten a flurry of attention recently as adjuncts to white winemaking. Nicolas Mähler-Besse, general manager of the Radoux USA cooperage concern, says they advise using granulated oak, not powder, during fermentation for longer tannin extraction, and he says the use of untoasted oak allows for focusing on mouthfeel, not the addition of oak flavors and aromas. Untoasted oak tends to have low levels of vanillin, whiskey lactones, and so on; toasting heightens the aromatic and flavor character and reduces the extractable tannins.

Besides improving mouthfeel, Radoux’s research suggests tannin additions can enhance fruitiness, which may be another illustration of the link between mouthfeel and perceived sweetness.

Malolactic fermentation tends to produce a broader, fatter mouthfeel. It’s the effect that made California Chardonnay famous—and in some circles, infamous. Suppliers have isolated and cultured strains that produce a range of mouthfeel effects. For winemakers who just want buttery texture without the buttery aromatics, there are “neutral” strains on the market that simply alter the acid mix, without impinging on the flavor profile.

Last but not least among the natural mouthfeel enhancers is residual sugar. This is what gives dessert wines plenty of body as well as plenty of sweetness, but it can also change the perceived balance of an officially “dry” wine in very small doses.

Not long ago, mouthfeel was just something that happened to good wines; now it can be micro-managed in exquisite detail, if that’s needed or desired. Or, like Gilles at Cooper Mountain, you can just rely on lees, lees and more lees, save some money, and savor the results. 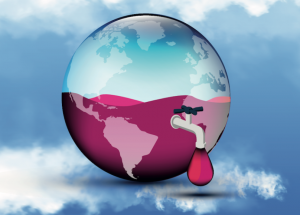 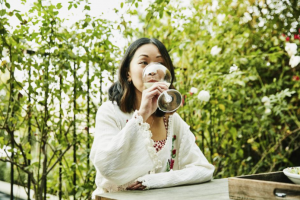