According to the latest data from the Organization of Vine & Wine (OIV), Spain had 13% of the world’s vineyard area under vine in 2020. China slid from second into third place, at 11%, with France just nudging ahead, also at 11%, while Italy place fourth, with 10%.

The data, from OIV’s State of the Vitivincultural World report, reflects ongoing stabilization of the world’s vineyard surface area since 2017. Planrtings have largely flattened over the past four years, sitting now at 7.3m ha. This is mainly due to the slowdown of China’s vineyard growth, and the EU’s implementation of its plantings scheme, which had handed back some domination to Europe. 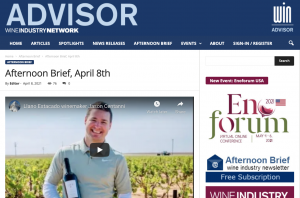 In a recent video, Alpha Omega Winery Winemaker Henrik Poulsen talked about "a new technique," called AromaLoc. It's flattering to be referred to…