AromaLoc™ has invented and patented a method to solve the long-standing problem of aroma loss during fermentation.

Lost aromas can now be retained in the finished product. The system is a totally additive-free and a hands-off process which prevents aromas from leaving the wine, without tampering with the wine or interfering with the fermentation process.  We manipulate only the headspace composition above the juice, which translates into changes in the fermenting liquid below. The AromaLoc™ process does not capture the aroma and then return it to the beverage after fermentation.

The AromaLoc  system was conceived in 2012, and since then, dozens of trials have been conducted. We have developed the AromaLoc  5000 machine to be durable and simple to use.  AromaLoc  5000 cannot accumulate more aroma than is produced so there is no danger of aroma overload.  Undesirable aroma compounds are not preserved because they have chemical properties making them flow right past our membrane system and out to the atmosphere.  Some ethanol and fusel alcohols are also discarded.  Our patented technology reliably enhances the organoleptic properties of wine.

Think your wine is good now? AromaLoc  will make it better.

Most winemakers think a cold fermentation is required to produce an aromatic wine, because it’s generally thought that more aromas are produced during cold fermentation. Unfortunately, cool fermentations take longer to complete, are harder to control, expensive to cool, and tie up both resources and tank space.  While this can lead to some aromas being retained, there is evidence that warmer fermentations actually produce more aromas.  The problem with conventional warmer fermentations is that the rate of CO2 production is high and this strips the aroma faster. Plus, warmer liquids do not retain dissolved aromas in the same concentration as cold liquids.  We are conducting white wine trials at 15-20C temperatures and are finding that AromaLoc can preserve these previously lost aromas and make a superior product while shortening the fermentation.

This creates obvious benefits for both the wine producer and the consumer.

There are additional environment benefits that come with use of the AromaLoc system.

Current winemaking practice means all the stripped aromas and alcohols exit the fermenter into the environment.  This has led to legislation in California to limit this source of pollution, as it contributes to photochemical smog.  AromaLoc  5000 recycles organic chemicals (aroma) back to the headspace to increase aroma in the wine — this also limits aromatic chemical pollution. 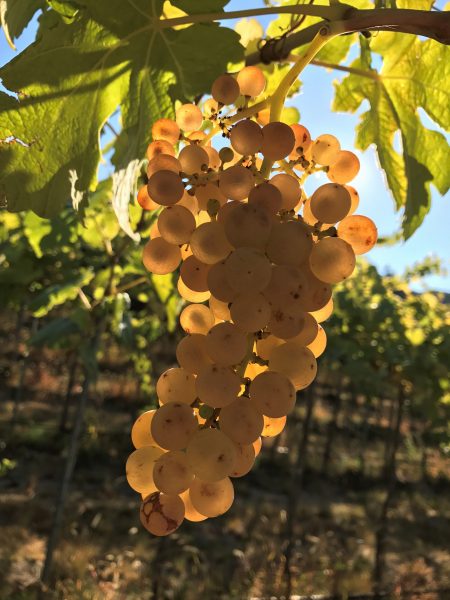 AromaLoc trials to this point have been done at several boutique wineries in British Columbia’s Okanagan wine region, and an ultra-premium USA winery. Through blind tastings with industry qualified professionals and hobbyists, and on GC/MS analyses, the AromaLoc system has been fine-tuned to be scalable from 20L to virtually any size.

The blue lines are control and red lines AromaLoc treated. We are regularly getting at least 20% increases in rating categories, and as can be seen, the increased aroma also affects different characteristics of the beverage. 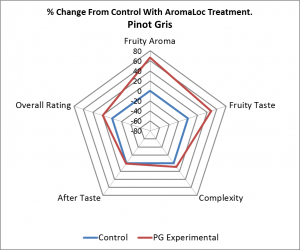 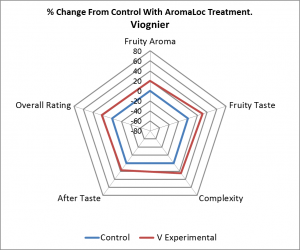 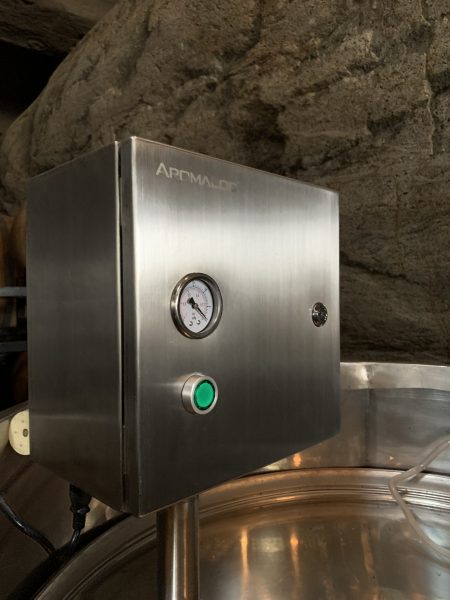 Beverage Volume: Up to 5000 Litres at approx. 18 degree Celsius

Connection:  Location of the machine is best at closest point to tank vent. We have adapters and mounting systems to accomplish most conventional applications.

Price:  Please contact Walter Meyer,  (walter@aromaloc.com) to obtain a quote which will include the different adapters required.

ARE YOU A WINEMAKER INTERESTED IN DEPLOYING THE AROMALOC SOLUTION?

White wines are usually made in closed top fermenters which are easily adaptable. We have adapters and hardware available for most conventional tanks.

Red wines are usually made by pumping over or punching down the cap. We have solutions for these processes as well. For barrel fermentations, we have worked with TN Coopers to develop a system which is commercially available. Modifications for different barrel sizes are possible.

We recommend the machine be applied from just prior to peak fermentation to near the end of active fermentation.

Please contact us with any questions you may have, regarding how we can work with your process.